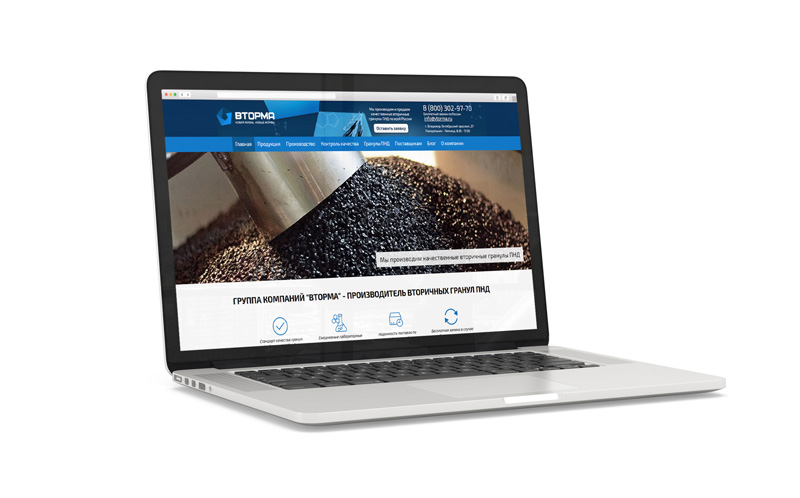 Creation of a new version of the Vtorma website. Further promotion and optimization.

A significant update of the corporate website based on the research of Central Asia and the analysis of competitors throughout Russia.

The purpose of the work: to tell about the services so that you would like to use them. The site should generate calls, requests, sales.

In November 2015, the management of the Vtorma approached me with a proposal for cooperation. The company wanted to update its website.

Vtorma has a very interesting and useful business. The company is engaged in recycling of garbage and waste. From old pipes and cans, high-quality pellets are obtained, from which all kinds of plastic products are made in the future. The source material is collected from all over Russia. Sales are also carried out throughout the country.

The old site was about 5 years old. There were several dozen pages on it. Unfortunately, there wasn't much information that customers were actually interested in. On the other hand, there were few technical errors, the site loaded quickly. The company already had a developed logo and corporate identity.

Almost all the work was carried out directly with the head of the company. The manager knows all the subtleties of the industry, customer expectations, and so on. When the company is large, the head of the sales department, commercial director, or an experienced marketer can act as such a person.

A small study was conducted (a survey of customers, a study of competitors), the results of which made it clear what should be on the site and what should not. Of course, this is only the initial version, in the future it is possible and necessary to make adjustments.

We have decided on the real advantages of the company, which distinguish it from its competitors. All these advantages were designed in a simple and convenient way.

We went to the production several times. I took the necessary photos that we used on the site. Unique design, photos, texts - all this will have an extremely positive impact on the further promotion of the site. There is nothing complicated in creating unique materials. All the texts were written literally in a week in a fairly light schedule.

In order to get the first customer response, contextual advertising was launched. Here the peculiarity turned out to be that after we identified the list of keywords and negative keywords, the target audience turned out to be extremely small. On the other hand, a high conversion rate is obtained, for example, 1 call with 6 clicks to the site. An advertising company in Google Ads has also been launched.

The new version of the site has changed the hierarchy relative to the old one.The URLs of the pages have also changed, in order not to lose the weight and authority of the old site, 301 redirects were made.

The website design is developed in 4 versions: for phones, tablets, small and large monitors.

About 2 years after the development, a CRM system built into the site was implemented, which allows managers to simplify and automate their work.