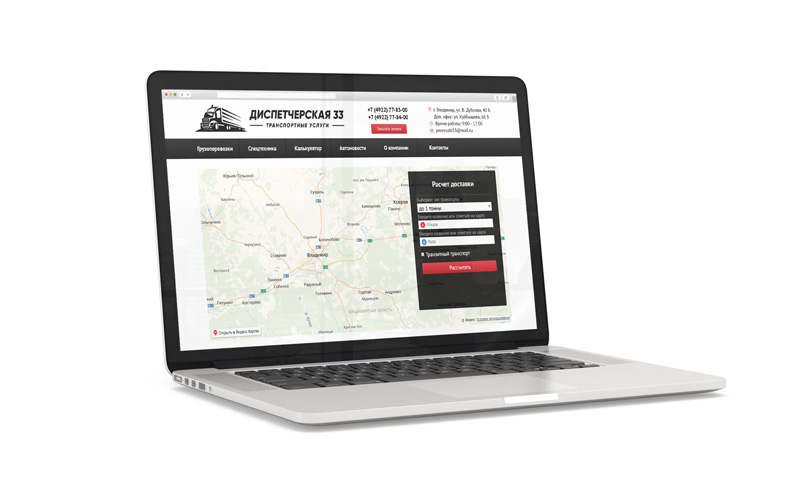 Promotion of the website of one of the most popular transport companies in the city of Vladimir.

Initially, the site was redesigned and the transition from Modx Evo to Modx Revo was made. Significant optimization of the average page loading speed: from 7 to 3.5 seconds. Implemented markup Schema.org .

A built-in CRM system has been developed: automation of logisticians' work with applications, their distribution, contract generator.

The transport company Dispetcherskaya 33 LLC is engaged in cargo transportation, passenger transportation and rental of special equipment in the Vladimir region. Work on the site began in April 2014.

The first version of the Dispetcherskaya 33 website was created and promoted by the Vladimir web studio. The total budget of the promotion was about 30 thousand rubles a month.

It is also clear that the studio in August-September 2013 massively purchased about 300 links. This is called a link explosion - for such actions, sanctions are also imposed on the site.

The site was made on the Modx Evo site management system, version 1.0.6. The web studio did not update to the latest version of Modx Evo - they said it was impossible.

There were technical errors on the site, the main one being duplicates. The site pages were duplicated 6 times. This had an extremely negative impact on the indexing and ranking of the site by search engines.

From the point of view of usability and marketing, there were also a lot of mistakes. In 2014, it was decided to redo everything from scratch on their own, abandoning the services of a web studio.

The site was rewritten from scratch on the Modx Revo version 2.3 site management system. All unnecessary functionality was removed, instead the really necessary information for potential customers was added (surveys and interviews with current customers). Despite the fact that the main page has become much more saturated with information, pictures and modules, the loading time of the site has been reduced.

First of all, the number of requests for cargo transportation using the order form from the website has increased by about 3 times. For example, in six months, according to the order form from the website, the company received 225 applications for transport services. Naturally, in such a conservative subject, customers prefer to call, however, it is more convenient for some customers to leave a request through the website. One application, among other things, may conceal the regular transportation of 20 tons of cargo over significant distances.

The number of downloads of the company's price list has also increased many times. It has been downloaded 985 times in 6 months. A driver recruitment form has been added, which is used by about 15-20 people per month. All these figures are available thanks to the goals set in the Yandex.Metrica web analytics system.

You can see the site traffic charts and traffic sources below.

At the end of April 2014, changes began to be made on the site. Search traffic then dropped by 10-20%. He began to recover after 3-4 months. The useful block was removed from the site, which consisted of 100% spam articles. There were a lot of rental links from Sape.ru . Instead, a full-fledged section with logistics and cargo transportation news was created.

A YouTube channel was created, more than 20 videos were shot. Including partners, for which services were provided by barter for Dispetcherskaya 33, for example, outdoor advertising was placed. At the moment, the channel has more than 800 subscribers and more than 270,000 video views. Channel availability + tight work with Google services + markup implementation Schema.org they allowed us to seriously increase the flow of visitors from the Google search engine in 2014.

The site structure has been changed. If earlier 1 page was devoted to the company's services, now 21. Only this gives the site a huge leap forward. A person from a search or contextual advertising gets to the right page, which is completely relevant to the query. Overall, the site has grown from 34 to 725 pages. The site has a great growth potential, there are ideas for creating new sections that will attract a stream of targeted visitors.

A lot of marketing work has been done. We learned what the customers care about, what they doubt, what is important to them. Based on this, the commercial pages of the site were made. All information is presented in the simplest and most convenient form.

Then they began to smoothly remove low-quality rental links purchased by the web studio. About 150 links have been removed. Instead, there were natural and affiliate links to the site (not purchased). Due to the announcement of the Minusinsk filter from Yandex, the remaining rental links were also gradually removed.

This review was originally written in 2016. Due to my employment at the Internet marketing agency impulse in 2018, I had to stop cooperation for about 1 year. But since 2019, I have been working with Dispetcherskaya 33 again.

Since 2016, the site has changed significantly externally and internally. I have developed a built-in CRM system that allows you to automate the work of logisticians with applications. I also made a contract generator with clients, which saves accounting time and reduces the chances of mistakes.

I want to praise the company that was engaged in the site in 2018 for introducing an important interactive element - a cost calculator. I then modified it and adapted it for mobile versions. A calculator is extremely important and useful. It is often used by site visitors.

I want to scold the same company for numerous problems with the layout and code of the site. As a result, the site began to load in an average of 7 seconds. This is unacceptably much in the current realities. I fixed it all.

At the moment I am refining and improving the site, making it more convenient and functional for visitors.

I transferred the site from MODX to the framework Nuxt.JS . Moved the site from a regular virtual hosting to VDS. The page loading speed has increased significantly. The MODX admin panel has been replaced with individually designed functionality for publishing materials.

Made a small redesign and refactoring of the code. Performed work to reduce the share of information traffic within the search engine.

Some work on the site perevozki33.ru you can see it on my YouTube channel: playlist from live broadcasts.