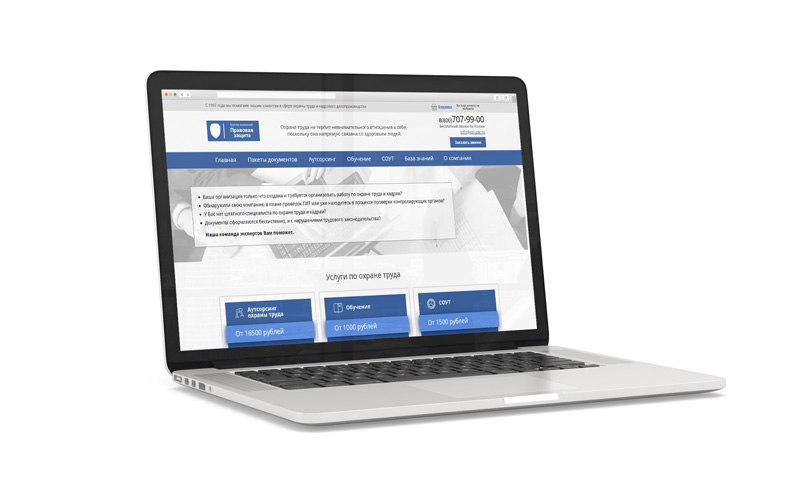 Creation and promotion of one of the most visited commercial sites in Russia on labor protection.

One of the most visited commercial sites in Russia on the topic of labor protection.

The site is being systematically developed. For 7 years, the structure, design, and CMS have changed. There is a large regularly updated information section. Monthly customers and subscribers of the customer receive a newsletter using the Mailchimp service.

The functionality of the online store is made on Minishop2 + Yandex.Cash Register + ATOL Online.

LLC "Pravovaya zaschita" is engaged in labor protection and personnel records management services in Vladimir and throughout Russia.

Work on the site began in June 2013. At that moment there was a website that was made by a local company. A paid 1C Bitrix site management system was used. The site had several hundred pages, a forum and some other modules. However, visitors did not go to the vast majority of the site's pages. There were just a huge number of technical errors.

1C Bitrix was abandoned in favor of a free Wordpress site management system. All unnecessary elements of the site have been removed. After a detailed analysis of the company's activities and the study of Central Asia, the main points were highlighted, which we then focused on.

The work on the website was carried out in close cooperation with the management and specialists of the LLC "Pravovaya zaschita" company.

From 2013 to the present moment, I have been making regular e-mail newsletters using the MailChimp service. The newsletter is received by the company's customers and subscribers. The total number of the base exceeded 1000 people.

Many sections of the site imply constant updating and addition of information. Thus, the number of site pages has grown from 30 to 2000.

The occupational safety specialist will find a lot of useful and interesting information on the site. The site is trusted by potential customers. It provides all the information.

Site traffic is gradually growing. The old site (which existed for more than 4 years) was visited by about 80-100 people on a weekday. Immediately after the update, attendance dropped by about 10-20%. Reindexing has begun.

After about 3 months, she reached the initial level. After that, a smooth growth began.

Using the example of a Pravovaya zaschita site, I would like to say that the main focus in site optimization should be on the usefulness and convenience of the site for visitors and the regular publication of new materials. Of course, it is worth mentioning about the relevance of site pages to specific search queries.

The group of companies "Pravovaya zaschita" has introduced several new services. The old services have also undergone changes. All this required a serious update of the site.

This time the emphasis was placed on the commercial component. There are more than 1000 useful information materials on labor protection on the site. To which there is a sufficiently large organic traffic. It is necessary to work through this traffic so that people go to pages with services.

First of all, I changed the menu. Now the main services are immediately visible, no need to go into the subsections.

I also changed the right column of the site, making blocks in it that lead visitors to the main services that the company offers. Also in the right column there is a subscription to the newsletter, the latest news on labor protection, site search.

The main page of the site has been updated. The whole focus is on basic services. All the information is immediately visible on the first screen. Added unobtrusive animation.

The previous version of the site was probably too strict and gray. Added several colored elements.

Illustrations, descriptions, and page designs were developed for the new service "Packages of Labor protection documents". Everything is very clear and colorful. The same illustrations are used in contextual advertising. It is worth noting that the packages of documents began to be sold almost immediately from the site. The geography of sales is very wide, customers come from all over Russia.

Previously, the Legal Defense had a "Subscription Service" service. Now it has been transformed into "Maintenance of the enterprise on labor protection". It also began to be sold not only in the Vladimir region, but also throughout Russia. The page has been redone.

By the way, now the right column of the site is not shown on pages with packages of documents and maintenance services. On all other pages, except the main one, it is there.

The contact page has also been modified. In the screenshot below you can see the new design of the right column.

In addition to updating the services and design, a lot of work was done on the technical optimization of the site. All unnecessary Wordpress functions have been disabled, images have been recompressed, the database has been cleared of unnecessary entries. A lot of the files that the plugins loaded were merged and compressed. Static file caching has been enabled. All this has greatly reduced the loading time of the site. Now the main page fits into 0.5 megabytes and 50 requests. The site loads in about 3 seconds - this is the average data from Yandex.Metrica.

The redesign was made in September, and in October the attendance has already increased from 2500 to 3500 people per week. This is not the final result, since search engines react to such changes for 2-3 months, Only after the new year it will be possible to judge the real results.

Updating the attendance schedule for the end of 2015.

The cooperation continues to this day, which cannot but please (for 7 years already). The site has undergone another redesign. But these are small things compared to other changes.

1) Implementation of the functionality of the online store. Now packages of documents can be purchased through the shopping cart using online payment. Implemented via Yandex.Cash register and Atol. Buyers receive a copy of the receipt by mail.

I implemented the functionality of the online store using the WooCommerce module for Wordpress.

2) Switching from WordPress to MODX.It was powerful. Transfer a site with 2 thousand pages, an online store and attendance of more than 1000 visits per day to another CMS.

I have been preparing for a long time technically and mentally. I made a parser that saved everything from the old site in a convenient way. I made a spare domain on which I deployed MODX + MiniShop2. Automated everything as much as possible. But the transition still took about a month.

4) Work on information traffic.Traffic grew, but most of it remained informational. This categorically did not suit me and I decided to make a knight move. At the time of the move, I did not transfer the worst information pages from the point of view of behavioral characteristics to the new site.

It turns out that on the one hand they attracted traffic, but on the other hand this traffic was purely informational and worsened the behavioral characteristics of the site.

I understood that this would be a blow to the amount of traffic, but it would not be a blow to the number of applications from the site. I wanted to make the site less informative. Naturally, all this was agreed with the management of the company. In September 2018, X-day happened.

I wonder how many web studios would include such a discussion point in their portfolio? But I think this is exactly what you should show to potential customers. There's a big question of trust.

Traffic dropped 2.5 times. Now he is gradually recovering. But the most important thing happened. It was commercial traffic that began to grow.

Now the site occupies the first places in search results for queries related to occupational safety training, occupational safety outsourcing, and so on. Previously, he was just in the TOP 10. Naturally, I regularly refine the pages and improve the site. But I am sure that without the risky actions described above, this result would not have happened.

Work with information traffic continues. Inside each information page I have added commercial service advertisements. The commercial pages themselves look attractive and are popular with the CA.

I turned the site over almost from scratch. Completely got rid of the traces of using WordPress. The code has become much easier and cleaner. The style.css file has been reduced by 2 times. After such work, any further improvements to the site are much easier and faster to make.

A redesign was carried out in parallel. The site looks modern, works fast, and displays correctly on all browsers and devices.

At the end of 2020, the site moved from virtual hosting to VPS. The usual PHP was replaced with PHP-FPM, a more fine-tuning of the server software was made - this significantly accelerated the page loading time.

Some work on the site otrude.ru you can see it on my YouTube channel: playlist from live broadcasts.